Lapsus$ vs the world: SIEM detection rules with ATT&CK mapping

A new player has entered the game

The ”Lapsus$” group, unknown before December 2021, has made multiple headlines in recent weeks, following multiple data breaches in big companies such as Nvidia, Microsoft  and Samsung. The group’s first mention seems to be in December 2021, when they attacked the Brazilian ministry of health with a ransomware attack. During the following months, the group attacked multiple companies with ransomware attacks.

According to researchers the actor behind Lapsus$ seems to be a teenager. His identity was not made public yet as he’s a minor and no criminal charges have been made so far.

What we know so far on the Lapsus$ attack on Okta

The group’s latest victim was Okta, an identity and access management solution used by thousands of organizations around the world. In January 2022 Okta was alerted to a suspicious event related to Sitel, a company that provides workforce services to Okta and recently released the timeline of this investigation. Okta also posted a statement regarding the Lapsus$ claims to which Lapsus$ replied in their Telegram channel.

In order for Okta to be able to provide support, a support engineer might need access to the customer's environment. To do this, a customer can provide Okta access as described in this guide. If an Okta engineer accesses a customer's environment using this feature, this would show in the logs as an impersonation attempt. This access can only be granted by a Super Administrator and according to Okta, the support engineer cannot create or delete users, or download a customer’s database.

There is no way to know if there might be a vulnerability that could be exploited by an attacker in order to bypass these safeguards as this feature is not publicly available and cannot be tested by end users, white hats or even attackers.

There are multiple ways to search the logs for anomalies related to this attack. If done via the Okta UI, there is a 90 day retention that would limit the analysts performing the investigation. If an organization has a SIEM, it could be used to perform a better analysis of the logs, depending on the log retention configured on the SIEM.

different Okta customers, some of them were related to Cloudflare. Shortly after the screenshots were published, Cloudflare uploaded a blogpost containing their investigation. 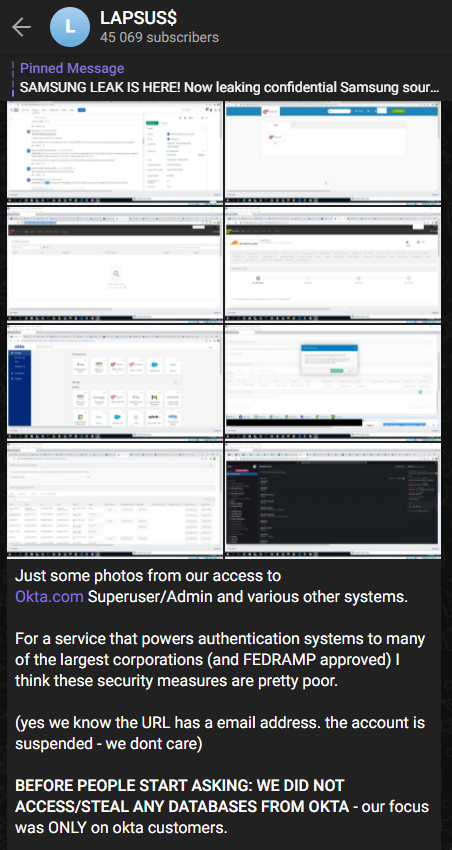 Some of the events mentioned by Cloudflare would make it difficult for analysts to find anomalies as they could create a lot of noise and eventually lead to alert fatigue. If these events indeed create too much noise, the use case that analysts should look for is when an Okta support engineer is granted access to a customer’s environment.

To do this, we can use the following query in Splunk environments:

This Query can be used in Sumo Logic:

This query will show any occurrence where an Okta support engineer was provided access to the organization’s environment by a Super Admin (MITRE ATT&CK T1078.002). This needs to be checked with the respective Okta admins to make sure the activity is legitimate.

This attack could very well be the next big supply chain attack (MITRE ATT&CK T1195.002), with a similar impact to the Solarwinds attack, only time will tell. In the meanwhile, Okta administrators and SOC analysts should make sure to monitor for any suspicious activity and follow the news.

We also recommend reading Microsoft’s blogpost following their analysis of Lapsus$ attack on them.